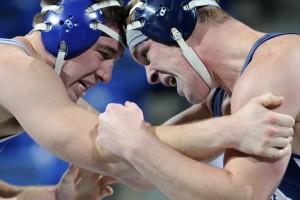 The other day I was reading a fantasy book and, in an early fight scene, the hero tackled someone coming at him with a knife.

As someone with a long history in martial arts training, I nearly tossed the book out of my lap.

No experienced fighter (which is what the hero was) would ignore the immediate the threat of a blade and try to tackle an enemy’s knees. That’s a good way to get a knife in the back. You have to deal with the most serious threat first.

But that got me thinking about how many authors do not have significant experience in martial arts and especially in situations that involve live sparring and competitions.

So with this in mind, I am working on a series of books to help authors bring more authenticity to their fight scenes.

Today I want to give folks a sneak peak of some material for the first book which is going to focus on bringing authentic grappling and wrestling arts into fiction.

Grip – a term for controlling an opponent with a hand. In Judo and other jacketed styles of grappling, grips are made most often by grabbing sleeves, collars, pant legs, and lapels. In non-jacketed styles, grips are made by grasping wrists, elbows and ankles, and hooking the head body and limbs.

Writing tip Grip fighting is essential to grappling and often the person that first establishes dominant grips will get the takedown they want.

Writing tip Grip fighting in jacketed grapplers can result in damaged and arthritic fingers on older practitioners. It is common to see grapplers with their fingers taped up to protect joints and tendons.

Pummel – a technique of swimming hands at close range to find a superior position of underhooks and head control. A strong pummel will set up a variety of throws and takedowns.

Writing tip Pummeling is often used as a warm up exercise or drill in grappling classes.

Shot – a term used for an explosive move to close the distance with an opponent. Wrestlers specialize in the shot, especially to set up single and double leg take downs. A good shot requires the shooter to change levels by low squatting in their stance and then springing forward.

Writing tip A poor shot is executed slowly and in a bent over position and can result in the shooter getting caught with a guillotine choke.

Writing tip A well-executed shot is hard to stop and often hard to see since the opponent is coming in below the line of sight. Shots are often set up with a hand to the face or a punch.

Hip Throw – a technique for throwing an opponent over the hip. In order for this throw to work, the thrower must close the distance with the opponent and make solid contact. The hip is the pivot point in which the opponent is lifted and then thrown. Therefore hands and weapons must be cleared for this distance to be covered.

Writing tip Holding an opponent’s arm after the throw can set up armbars or allow the thrower to kick or otherwise control the opponent.

Writing tip A well-executed throw feels effortless for both the thrower and the opponent.

Double Leg Takedown – a classic technique from wrestling for bringing an opponent to the ground. It generally involves a shot to close the distance, a wrapping of both legs with the hands, and then either a lifting or driving of the opponent by scooping up both feet.

Writing tip A double leg takedown can often turn an opponent completely upside down and often puts them in an unfavorable position on their back that will set up either pins or submissions.

Slam – a term for picking an opponent up and driving them into the ground. This is generally a move that a stronger and larger opponent will do to a smaller, weaker opponent. Opponents can be slammed from both standing and ground grappling. Serious injury can occur including broken necks, unconsciousness and spinal injuries. In some competitions, slamming is a banned technique in order to protect the athlete.

Writing tip A slam can also temporarily stun an opponent

Pin – a term used for controlling an opponent against the ground. In wrestling, a pin is achieved by pinning an opponent’s shoulders to the ground. Different styles of wrestling have different periods of time for the pin to result in points or a victory. In a non-competition setting, a pin can be used to hold someone down.

Mount – one of the most dominant positions in grappling. In this position, the grappler is straddling a prone opponent. The opponent can be on his or her back, front or side. This position if properly held is difficult to escape though there are technical solutions and it is easier for a larger opponent. The mount is dominant because 1) it is a strong control position, and 2) it is a favored position for launching attacks such as punches, chokes and armlocks.

Writing tip One risk with the mount is that it tends not to be mobile, so if facing multiple opponents, the grappler is at risk for getting kicked, punched or stabbed.

Submission – a technique that forces an opponent to either give up (through tapping to acknowledge the submission, through pain to stop fight, through the breaking of bones or through unconsciousness.) The line between a submission to cause compliance and injury can often be very narrow.

Writing tip Submissions when fully applied will cause injury, unconsciousness or even death.

Arm Bar – a type of submission that locks the elbow joint. This move can be applied from standing though it is more secure when done in a ground grappling scenario. It is very easy to injure an elbow if this move is applied fast and hard.

Writing tip An armbar can break an opponent’s arm

Rear Naked Choke – a type of submission which involves choking someone from behind. This move is also known as the sleeper hold or the mata leon (lion killer).

Writing tip If the choker is shorter than his opponent, he can break him down by pulling backwards on his shoulders or stepping onto the back on his knee

Wrist Lock – a type of submission which involves isolating and bending the wrist, often by grabbing the fingers. Wrist locks are found in most martial arts and can applied from standing and ground positions.

Toe Hold – a type of submission primarily found in ground grappling and MMA. This submission involves bending the foot at the ankle by the use of both hands.

If there are any other grappling terms you want to see explained, please let me know. I’d be more than happy to help you.

Peter Fugazzotto is a fantasy and science fiction author who fights to protect the earth by day and battles his ego with armbars and slashing sticks by night. He lives in Northern California with his wife, daughter, bird and dog. His short stories have been published in Heroic Fantasy Quarterly, Grimdark … END_OF_DOCUMENT_TOKEN_TO_BE_REPLACED