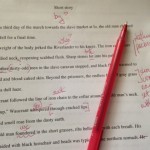 While I was listening to the latest Writing Excuses podcast on writing critique groups, a flood of memories came back to me from the various critique groups in which I have participated – from my days as a university student to the exchanges at coffee shops in North Beach to my current group focusing on polishing up science fiction and fantasy stories with the goal of getting them published.

With these reminiscences of marked up manuscripts and late night exchanges, another set of memories have returned: the Seven Deadly Sins of critique groups.

Okay, maybe not deadly seven sins, but these are my top 7 pet peeves when it comes to writing groups.

(And, yes, I am guilty of some of these at times.)

My first pet peeve is when you haven’t read the manuscript but pretend you have. You can’t just skim over the manuscript at the meeting. I can see you. Seriously I can.

But I get it. The manuscript came late. Work exploded. Your daughter had to stay home from school with a runny nose and droopy eye. That’s all fine.

But don’t start tossing in comments if you haven’t yet read what is on the page. Because you can only critique what is written, not what is talked about.

At a certain point if you want to be in a writing group, you actually have to be a writer. And, yes, that means writing something and sharing it with the rest of the group.

If you just want to be a critic, I am sure there are critic critique groups you can join. Or maybe just a book club.

(But I do get that sometimes life gets in the way of writing as much as you want to. I know it does for me.)

“Great use of description.”

“You could get that published.”

No story is perfect.

It’s your job as the critic to find holes in the work – whether it is in the premise, the character motivation or the choice of words.

We need honest feedback in order to grow our writing.

Yes, that dead story. The one with the brilliant, best seller idea. The one that is your darling.

The one that you wrote five years ago and have work shopped through other critique groups.

The one that has dust piled an inch thick on it.

The one that has problems you just want someone else to solve.

Writing is less about the product (especially the early product of the writer still sharpening his or her teeth) and more about the process.

Yes, it is about the stories we write. But it is also about learning.

Better to send that dead story out to the black hole of agents and publishers and get to work on a new story – one that will incorporate what you are learning both as a critic and a writer in your writing group.

This is how we grow.

Number 3: Talking Too Much

Admittedly writing is a lonely business, hunched in front of the computer, muttering to ourselves and our characters. And then when we finally pull our heads out of our manuscripts, our family and friends glaze over when we feel the need to gush about a twist in plot or a detailed description of the logic of magic.

So when we finally surround ourselves around other writers we want to talk.

Save the socializing for before or after the work session. Chat on the sidewalk or go grab a beer but guard that critique time because this is your chance to get the peer level feedback on your work that will bring you to the next level.

This is a common one. You read a story and you know how to make it better.

So you tell the writer how to fix his story.

I know this sin because I am often guilty of it.

The problem with fixing the story for someone else or giving them a really good idea is that suddenly it is a different story and maybe not the want that the writer wants to write. But you’ve given her a solution and she runs with it.

It is so tempting in writing to succumb to being told what to do to make the story a success.

But there’s a problem with this. The story might get more muddled because while one problem may get solved, others may stay unresolved or get worse.

But when a fix is given, the writer takes it without it understanding it on the level of story. The fix is given but not earned.

Number 1: Defending Your Words on the Page

By far my biggest pet peeve is when a writer tries to talk his way out a criticism.

You know what I ‘m talking about.

And you have have to explain how it does make sense: how Mr. Pibbs was an orphan, how he barely had enough food as a child, how even after he became a Senator that he had an incredible insecurity about where his next meal was coming from.

Yes, this does explain why, but if all of this is not clear on the page – in the words that have been written on the page – then the critic is right.

In fact, the best way for you as a writer to understand a criticism is to simply say, “Thank You.”

Even if you disagree with it.

And then later, in the dark shadows of your writing loft, read their comment again. Read your text again. Read it as if it were the first time you were reading the story. Are the words on the page the story you want to tell?

What are your pet peeves with writing critique groups?

Peter Fugazzotto is a fantasy and science fiction author who fights to protect the earth by day and battles his ego with armbars and slashing sticks by night. He lives in Northern California with his wife, daughter, bird and dog. His short stories have been published in Heroic Fantasy Quarterly, Grimdark … END_OF_DOCUMENT_TOKEN_TO_BE_REPLACED