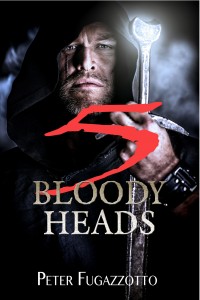 Droplets of blood sparkled in the stubble of Spear Spyrchylde’s beard.

“I’ve had enough of your lies,” Spear said.

He grabbed the farmer by the wrist, all tendon and bone, a man who swung a hoe rather than an axe, and jerked him from the outstretched hands of his family. Behind them the untamed lands of the border – the swampy earth, the black pines, the distant peaks – were cloaked in the heavy morning mist.

The farmer, his lip split from Spear’s fist, stumbled towards his wagon before regaining his feet. The knees of his threadbare trousers were sticky with the brown mud of the road. Blood stained his tunic. The middle-aged man was a Northman too, but unlike Spear he wore no sword on his belt, only a knife. Good for cutting brush and twine but useless for a fight. This farmer represented the new beaten-down North that Spear despised. Nothing like the old days.

Spear kicked the smaller man’s feet from beneath him, and as soon as the farmer hit the ground, Spear leveled the tip of his sword in front of the his eyes.

The man, the ends of his pale beard and braids coated in mud, touched the blade with his fingertips futilely trying to push the sharp metal aside. The edges of his eyes were weathered with wrinkles. Behind him, the donkey that pulled the wagon brayed as if impatient with all this. “I’m…I’m a clan brother,” said the farmer. “You…You and I…oh please, we’re cut from the same cloth. N-Northmen. Why…Why are you d-doing this?”

“Is that not obvious?” Spear swept his sword back towards the road where his seven armed men and women hurled sacks from the wagon, shook out the blankets and furs, and herded the three children and wife towards the side of the road. “I want coin! So where is it?”

“We are s-simple pilgrims. P-Poor farmers. Please…we have left our worldly possessions behind to take to the road. To see She Who Has Risen.”

Spear touched the tip of his blade to the man’s throat. Even his beard was weak. Sparse, thin, unbraided. Had this man ever earned the scars of his clan? How easy it would be to plunge the cold metal through that soft flesh. “I’m no fool,” said Spear. “Pilgrims still need coin. You need food and lodging.”

“She will see to our needs. We carry all the food we require. Grain, meat, salt. We have no need for coin on this journey.”

“You lie.” Spear cocked his sword at his shoulder and made as if to swing it at the farmer. The man flinched too easily. “Others have trespassed into my fields and we have taken their coin. Payment. I know the witch demands offerings. A price to soothe your souls and fill your heads with promises of a future that erases the past. She wants coin. And so do I. So where’s the coin?”

The farmer’s wife, her children huddled to her skirts, wagged a finger. “We were warned about men like you, robbers along the road. Northmen who have turned against their own. Outlaws infesting the borderlands.”

Her voice screeched like stone against metal. It was all Spear could do not to charge over and cuff her across the mouth. Instead, he glowered at the farmer.

“Think I won’t get it out of you?” Before the farmer could answer, Spear swatted the flat of his blade against the man’s cheek. The pilgrim’s skin split, the pale flesh opening before a sudden sheeting of blood.

The family screamed. Even the donkey let loose a strangled cry. All but the girl, a waif, her wrists thin like the bones of birds. She was dressed in furs and woolen cloth, leather sandals exposing her grimy feet, and not a single copper bracelet or silver necklace adorning her. Her hair, unlike the others, was dark like a crow. The girl did not scream. Instead she stared at Spear with narrowed eyes. He could see that she had the cold heart of a Northerner of old and would plunge a dagger in his breast given the opportunity. He almost wished that she would.

“Where’s the coin!” Spear screamed into the face of the farmer’s trembling boy. “I’ll kill your father.”

Spear could imagine the terror that the boy felt. Moments before, their simple family had been rolling along on their cart pulled by their gangly donkey, led in a silly children’s song by their ruddy-cheeked mother. Their father, weak bearded, had strolled alongside the donkey, a freshly cut switch in his hand, a blade of grass bobbing between his lips. The road they followed was a nearly straight, muddy furrow through a wide valley of green. They walked the path of pilgrims from the clan lands of the North crossing through the borderlands to reach the savior, a witch of all things, in the lands to the east. Spear could imagine the wondrous lies that had filled their ears. Nothing could drag the North out of its wretchedness.

Then Spear and his bandits had descended, bursting out of the shadows of the forest, their heavy feet tearing up clods of earth, eight men and women bent in a sprint, faces painted in woad and vitrum, iron-headed spears and weathered shields raised as they charged through the morning mists. Only the donkey had attempted to run but it could not break free of the shafts and weight of the wagon.

Now the worst of the bandits – scarred and towering – had blooded their father.

Spear was large even for a Northman, wide of chest behind a pilfered Dhurman leather vest, his thighs bulging beneath dark, stained woolen trousers. Where the other bandits grew their beards long and braided, Spear kept his head and face shorn to a ragged stubble that highlighted the thick old scars that cut across cheek and lip. Beneath his brooding brow, pale eyes reflected a lifetime of murder.

The front of the boy’s trousers stained suddenly. The swaddled babe left by itself near the foot of the wagon wailed even louder, small pink fists thrashing in the air. The dark-haired girl’s eyes only narrowed further.

Spear strode over to where Longbeard kept the wife occupied, she swatting at his callused hands each time he tried to reach beneath her skirts. Growling a curse, Spear elbowed his man aside and caught the farmer’s wife by the throat. Her red-rimmed eyes widened in horror.” “You’ll watch her die. But before that…”

The pilgrim shook his head. “We have nothing. Have mercy.”

“Clear the back of the cart,” Spear said to his crew as he drove the woman backwards on her toes. Longbeard, with his well-combed and oiled beard, tracked close to Spear, his breath heavy and rank at his ear. The young Northman was always the first to lay his hands on the women. Spear shoved him away.

Spear tossed the woman to the ground and he angled his head at Seana, holding that damned painted shield, but she did not move. She stood back from the press of bandits, her lips tight, as if she wanted nothing to do with what they were. It was the same look she had been giving Spear for the last several weeks, the same look when she backed out of his embraces and laid down her bedroll far from his. Spear choked back a grunt.

“Kiara,” he said to other female bandit in the crew and the flame-haired woman bent to the babe, her fingers alternating between unwrapping the swaddle and tickling the child’s plump neck, and then her hand was free, a small leather bag dangling. She tossed it to her chief.

Spear tore open the bag and dumped its contents into his hand. A dozen bronze pieces and a handful of coppers. All stamped with the face of the Dhurman Emperor, the man whose armies conquered the North. Spear’s stomach dropped. At most, enough to buy a new pair of boots and a single chicken. The coins were greasy, smudged with grime.

“That’s it? You risk the life of your family for a handful of dirty coins? Where’s the rest? Where’s your offering to the witch? Where you hiding it?”

The farmer dragged himself through the mud until his hands found Spear’s worn boots. His blood dripped steadily on the cracked leather. “That’s all we have. Mercy on us. Mercy on a clan brother. Leave us be.”

“We’ve gotta get something out of this,” said Longbeard, his oiled beard shining. “Give us something.” He grabbed the mother and began pushing her towards the back of the cart.

The other bandits waited for Spear’s word, fists around swords and spears, eyes to their leader. But he had nothing for them.

Spear kicked the farmer’s hands away and then chased after him with sharp kicks in his ribs until he curled into a ball. The mother broke free of Longbeard and ran to her husband’s side but before she could reach him, Spear backhanded her, the blow sending her sprawling to the ground.

Suddenly, Longbeard stood apart from the others, wide legged, the swaddling babe held over head. “Give us the coin or I’ll dash your baby to the ground!”

The little thing screamed, fists pounding at the dark sky. The mother crawled along the ground, weeping, her dress trailing in the mud.

“Put the babe down, you idiot,” said Spear. He pushed his sword into Longbeard’s vest, the tip beginning to pierce the old cracked leather.

“Hiding a few more grubby coins? You’d kill a babe over that?” He pressed the blade further. Blood dripped down the leather

“Whose side are you on?” screamed Longbeard.

Longbeard bared his teeth and took a step back lowering the babe to the ground.

Kiara quickly took the babe into her arms and retreated from the circle of bandits.

“So now what?” said Longbeard.

They stared at him: the family, sneering Longbeard, Seana with tears in her eyes, the others with their swords and spears in fist. The words stuck unformed behind Spear’s lips, and the unspoken gathered and boiled, rising into searing heat in his head.

Then the donkey started in: braying, thumping its hooves into the mud, making an unbearable racket as if it were laughing.

Spear’s fury boiled out. He clutched his sword in both hands and swung the blade along his feet in an upward arc. The edge cut right through the donkey’s throat. But rather than falling to its knees, the donkey tottered, still braying its laughter. It lifted its head to the heavens, blood spraying. Spear would end its misery. He lifted his sword overhead. Before he could drop the blade, however, the beast toppled to the ground.

Gore dripped from Spear’s hands and face, and it was not a cleansing blood, coppery, sticky. His breath raced: a low growl seeped from between his lips.

Even the dark-haired girl trembled now.

Spear finally found his words. He refused to look at any of the others, followers or prey, all frozen with fear but stared past them to where the edges of the world disintegrated into the mists. “Sons of bitches, look what you made me do! All for a handful of dirty coins.”

Peter Fugazzotto is a fantasy and science fiction author who fights to protect the earth by day and battles his ego with armbars and slashing sticks by night. He lives in Northern California with his wife, daughter, bird and dog. His short stories have been published in Heroic Fantasy Quarterly, Grimdark … END_OF_DOCUMENT_TOKEN_TO_BE_REPLACED