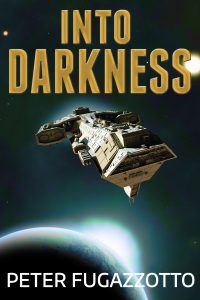 Marley stared out the window. Beyond the blur of trees along the road, the stars burned bright against the darkness.

“Will we be there soon?” she asked.

“Another twenty minutes,” said Hsu. He squeezed her hand and she squeezed back.

Marley could hardly wait to reach Hsu’s family compound. Through a break in the trees, she spotted the lights of Taichung, gaudy, their brilliance reflecting in long bands over the impenetrable sea. “I’ve changed my mind. I’m not going to send the message to Prime until tomorrow.”

“My father will protect us. Beyond the AI’s reach.”

“Hot in here.” Marley thumbed the window button in the armrest. The thick glass did not move. She held the button down. “Window’s not working.”

Hsu stretched across the seat to roll down his window, and when it did not open, he grunted. “Annoying. But at least I’m trapped with a lovely woman.” He ran his fingers up her forearm.

She giggled at her husband. “First thing I’m going to do when we get there is strip out of this combat skin.” She tugged at the form-fitting suit made of a fluvium-woven fabric. “And hurl my guns and nanoknife down a well.”

“First thing I’m going to do is throw you down on a bed.” His fingers traveled up her arm to her breast.

Marley flicked his fingers away. “Twenty minutes, my love. Then you can do your best.” She pursed her lips.

“Now I’m overheated. Need air.” Hsu tapped the window button again, and when it still did not move, he sighed. “Maybe we should’ve hired out a vehicle from Huang Di Prime instead of Antaboga-2.”

“So Prime could track my every move? Isn’t that what we’re running away from?”

“Antaboga-2 apparently doesn’t maintain her fleet. Cheapskate AI.” Hsu leaned forward in the seat and squinted at the automated dashboard. “You know anything about these models?”

Marley pinched his butt. “Why would I know anything?”

Marley kept her hand pressed against his backside. She did not want to lose contact with him. She had spent too many months away at the far edges of Huang Di Prime’s Asian territory. Hsu, tall, with broad shoulders and grim unsmiling lips, was the one mistaken for a former space marine. He had that hard-edged, square-jawed look. He was the one people guessed worked security for an AI conglomerate. Marley, on the other hand, slight of build, stood at Hsu’s side unnoticed at Shanghai social events. The exotic EurAsian girlfriend of the Taiwanese-born engineer. But, unknown to outsiders, she was a killer for hire. As Huang Di Prime’s fixer, her gun was the tool of her trade. The agent of last recourse for the AI. She shuddered at the memory of her recent string of jobs, many focusing on weakening his rival AI Antaboga-2. Marley wanted to be free of him. She wished they were already at Hsu’s family compound.

Hsu tapped at the passenger keyboard. “Driver, status check on the windows.” He glanced at Marley with a smile, but then he turned to stare out the rear window, his lips slack. “Shit, did we just take a wrong turn?”

Marley followed his gaze. The distant lights of the port were replaced by a dark canopy of trees. “This isn’t the way?”

Marley lunged forward and slammed her fist on the emergency brake button. The transport did not slow down and, if anything picked up more speed, careening along the unlit road.

“We need help.” She lifted her hair and pulled the signal blocker from the data port embedded in the base of her skull. “Prime, this is Marley. I have a situation. I need help.” Static crackled over the comms implant.

The car lurched around a corner, tires squealing, and Marley slid across the seat into Hsu. His eyes widened with fear.

Hsu leaned into the door and pulled at the handle, but the door would not open.

“Stop! We can’t just jump out. We’ll kill ourselves.” Outside the window, the trees blurred. The car rounded another corner and Marley tumbled into Hsu. She lost her breath. He caught her in his arms and held her for a moment.

She wanted to stay in the safety of his arms but she needed to act.

She pushed away from him and thrust her hand into the travel bag near her feet. She pulled out a pistol and pointed it as the console. “Put on your seat belt, Hsu! Only one way to stop this car!”

Before she pulled the trigger, the night sky flared as if daylight had suddenly burst above the mountains.

Marley saw everything clearly: the soft line of his lips, the fingers of his right hand clutching the seat belt, the heavy canopy of mango trees alongside the road, the red eyes of a band of monkeys clinging to the branches.

Then came the thunder of the explosion, the air sucking away, the stars beneath them, the monkeys spinning away. Marley floated in the middle of the compartment as if gravity had been disrupted. Then it returned and she crashed into the window, the ceiling, Hsu, the floor, and the ceiling again.

Her head broke the window. Everything went black.

She woke to heat. Searing heat. Above the roar of the fire, the monkeys howled.

She opened her eyes. She lay halfway out of the passenger window, her upper half sprawled in soft grasses and shards of glass. When she tried to crawl, she could not find the ground with her right arm and fell.

Pain seared up her spine and she passed out again.

Fluid dripped on her cheeks, too cold to be blood. The acrid stench of fuel enveloped her.

She gagged and puked blood-streaked phlegm.

She dug her left elbow into the soft earth and tried to drag herself from the wreckage. She did not move. She craned her neck backwards. The twisted metal of the fiery transport pinned her legs at mid-thigh. Pain pulsed in growing waves through her entire body.

She whispered a stream of curses but it was useless. She was trapped and at any moment the wreckage could burst into a fireball. She would be burned alive if she did not get out.

She remembered Hsu. Was he still in the transport? She screamed his name.

She stared back into the flames. Hsu lay unconscious and crumpled against the far window. Blood gushed from a cut along his brow. He coughed bits of flesh and bones from torn lips.

His jacket was on fire. But he still did not wake.

His limbs reflexively curled up against the flames. The hair on the side of his head singed and the flesh reddened and blistered.

Marley screamed, and despite the near blinding pain, redoubled her effort to tear herself from the pinning wreckage. She could not escape. She could not help Hsu. Through sudden tears, she watched him burn.

She looked around for the gun. If she could not save him, she could prevent his suffering and then her own, when the time came.

A low hum erupted from the sky. A black-hulled ship descended, its movement parting the unfurling smoke.

The pain overwhelmed her. She faded in and out of consciousness. The ship became two ships hovering. A black clad man walked through the smoke, flames reflecting off his shiny helmet. A biometal arm reached through the flames. She watched him drag a nanoknife above both her knees. She smelled the cold titanium of a robot servitor’s chest place and felt the hard embrace of his arms.

She called to the black clad man standing in front of the burning wreckage. “Save him! Pull him out! Hsu!”

She waited for the figure to reach one more time into the flames.

When she woke, she was in the gloom of a ship. She stared through the open door and down the ramp. The black clad man strode towards her, away from the wreckage. For a moment, she thought he carried something. But her vision had doubled. He carried nothing.

Then behind him, the transport exploded in a searing ball of flame, so hot that it flushed her face, so hot that the tears dried in her eyes.

The man entered the ship, the flames haloing around him. The door of the ship slid closed behind him, and Marley was swallowed in darkness.

Read more about Into Darkness

Peter Fugazzotto is a fantasy and science fiction author who fights to protect the earth by day and battles his ego with armbars and slashing sticks by night. He lives in Northern California with his wife, daughter, bird and dog. His short stories have been published in Heroic Fantasy Quarterly, Grimdark … END_OF_DOCUMENT_TOKEN_TO_BE_REPLACED