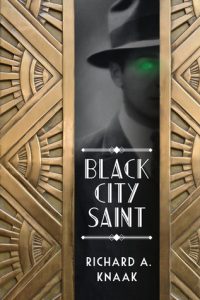 First line/s: “The old, black Model T touring car rumbling past the lone street lamp across from her house had seen better days, but it served the needs of the two young, gaily dressed couples heading towards the sounds of jazz in the distance. My client grumbled under her breath in German…”

Knaak establishes the protagonist through the first person point of view, introduces the setting (old Chicago as a place of change and conflict), and sets up the protagonist as someone who is doing a job for someone else.

Within the first page, the world of fantasy is more clearly established with the introduction of the talking dog and that the nature of the job is ridding the woman’s house of a fairy creature. This places the story strongly in the urban fantasy realm with the twist of it being told in old Chicago.

Reader identification with protagonist: Reader gains sympathy with Nick because he is competent (knows how to fight supernatural monsters, fights well, and is calm under pressure), is there to help a woman solve a problem (showing that he has compassion), and has the weakness and curse of having the dragon inside of him (so we have sympathy for him).

Character desire: We learn that Medea is constantly trying to control the dragon inside him and wants to figure out a way be rid of his curse. We also see his strong sense of duty to fight the creatures of the faery world when they come into our world.

Introduction of other characters: Fetch (the talking dog creature), the Dragon, the Lady

First of all, the writing is strong and the first chapter (especially the fight scene) flows well. The world is a rather unique mash up of urban fantasy with its gangster-era Chicago setting.

On top of that, the world of magic and monsters is interesting. The creature in the attic is creepy and suggests even worse creatures to come. And as a reader, I want to see what else spills over from the faery world.

The conflict for power with the dragon inside of Medea is good storytelling. Medea has an incredible power inside of him (by way of the dragon), but to use that power risks the power overwhelming him. This sets up one of the most important story dynamics.

The relationship between Medea and Fetch is fun and I wanted to see more of their interactions. It adds a great levity to the story.

Another strong piece of writing is how distinctive Knaak makes each of the character’s voices.

Mysteries: As a reader we want to know more about the world of the faeries. I was also intrigued by the dragon that occupies Medea and how he struggles with not unleashing him. How did he get the dragon inside of him and how will Medea get the dragon (safely) out?

The final mystery in the first chapter (and the most compelling one) is the revelation at the end that the Gate has been breached, suggesting that things are going to get much worse, real quickly. This is the catapult that sends us into the next chapter.

Peter Fugazzotto is a fantasy and science fiction author who fights to protect the earth by day and battles his ego with armbars and slashing sticks by night. He lives in Northern California with his wife, daughter, bird and dog. His short stories have been published in Heroic Fantasy Quarterly, Grimdark … END_OF_DOCUMENT_TOKEN_TO_BE_REPLACED