The next book in my own going study of the craft of writing a good opening is Jeff Salyards’ dark fantasy The Scourge of the Betrayer.

The Scourge of the Betrayer 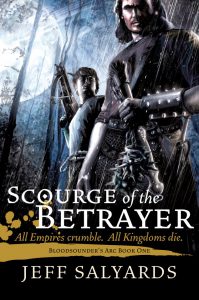 Title: The Scourge of the Betrayer

Opening of the Scourge of the Betrayer

First line/s: “My new patron clambered down the wagon, dark hair slicked back like wet otter fur, eyes roaming the stable yard in a measured sweep. He fixed on me briefly before continuing his survey and it occurred to me, just as it had a hundred times since accepting the commission, that this would be unlike any other job I had done.”

Salyards establishes the protagonist immediately through the point of view. He introduces the antagonist in Killcoin (and power relationship that forms the heart of the story. Finally, he sets up the uniqueness and implied danger of the story because the job will be unlike any other.

Character Identification in the Scourge of the Betrayer

Reader identification with protagonist: Reader gains sympathy with Arki because he’s an outsider and a non-soldier among vicious soldiers. We also sympathize because early on it’s clear that he’s in over his head and he is weak among those stronger than him.

Character desire: We’re introduced to Arki’s desire towards the end of the opening section when he protests that the party will take to the road. We learn he’s unsatisfied with chronicling the boring lives of merchants, and wants to be “part of something larger.”

Why Keep Reading The Scourge of the Betrayer

The relation between Arki and the Captain and the Syldoon draws the reader into the promise of the story. We can see also the promise of adventure, lasting friendships, and violence.

Mysteries: Salyards introduces several mysteries that makes the reader want to find answers. Will Arki become more than who is as a result of the journey with the Captain, which in essence is the designing principle of the story. What are the Syldoon hiding? Where are they traveling to? Will Arki become accepted as family or friend by the Syldoon, fulfilling a deep character need.

Peter Fugazzotto is a fantasy and science fiction author who fights to protect the earth by day and battles his ego with armbars and slashing sticks by night. He lives in Northern California with his wife, daughter, bird and dog. His short stories have been published in Heroic Fantasy Quarterly, Grimdark … END_OF_DOCUMENT_TOKEN_TO_BE_REPLACED