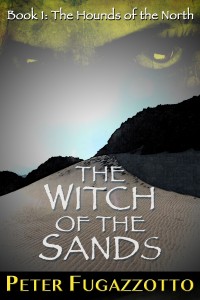 A lot of you may not know this but The Witch of the Sands, the first book in the Hounds of the North series, was actually written after Black River.

In fact, I did not even start on The Witch of the Sands until two years after I began Black River and had a near final draft of the novel done.

I know. It sounds crazy. Why I am doing things backwards?

And it is backwards because chronologically Black River takes place after The Witch of the Sands.

But there was a method to my madness.

It had to do with my longer term vision of how I wanted my career as an author to develop.

In the middle of last year, I decided to grab the proverbial bull by the horns and pursue becoming an indie author, instead of a purely traditional author trying to make my way with agents and publishers.

As I researched the best practices for building a career as an indie author, I learned that most folks were finding better success (over the long term) writing a series of books rather than stand alone books.

On top of that, a number of authors were using a strategy of starting a series with a short story or novella as a way to introduce readers to the characters and world that would be explored throughout the subsequent books.

So I got it in my mind that I wanted to release a shorter work in advance of Black River.

Luckily the source material for that story was already there in an earlier draft of Black River.

It was a series of scenes in the desert of Hopht – Shield and the Hounds were hunting down a witch under the command of their Dhurman handler Cassius – that I decided to cut because I wanted to get my characters back into the North sooner.

I had liked what I had written with those scenes but I wanted to tighten up the plot line of Black River and get Shield and the others more quickly into their story.

So I was able to take this scene and use it as the seed for what eventually became The Witch of the Sands.

And I’m happy I did it as it gave me the opportunity to dig deeper into the characters and set the tone for the whole series.

It’s a good reminder as an author to never throw away anything you’ve written. You never know when you might be able to transform it into something else.

Peter Fugazzotto is a fantasy and science fiction author who fights to protect the earth by day and battles his ego with armbars and slashing sticks by night. He lives in Northern California with his wife, daughter, bird and dog. His short stories have been published in Heroic Fantasy Quarterly, Grimdark … END_OF_DOCUMENT_TOKEN_TO_BE_REPLACED