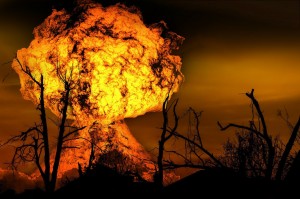 There’s nothing quite like having a work in progress explode to welcome in the new year.

I ended 2014 strong. I had published the first two books of the Hounds of the North series. Not only did I have my idea down for the third novel, I was more than 30,000 words into it. In fact, I had already torn it down, made some big picture changes, and had restarted it with fresh energy. I had freed up my schedule and was on a tear with my writing and ready to have my first draft finished and to reviewers by the end of January.

January was going to be a good month.

The whole thing just died on me.

It’s hard to describe what happened. I had been averaging 2,000 words a day for more than a week, and the words were flowing, the scenes were building, and then one morning I fired up the laptop, looked at the screen and realized that the concept was not working.

The story had gotten away from me. I had threads. I had no idea what the story was about. Was it really the story of a girl trying to rescue her brother? Was it about a man trying make amends for a mistake? Was it about a bandit trying to keep his place in the world? The problem was that it was all these things and they felt disjointed.

While writing is art and science, it is also instinct, and my instinct was telling me that the story was not working for me. I stopped dead in my tracks.

There was something fundamentally wrong with the story. It was convoluted. It was telling too many stories, and none of them at the depth that they needed. It felt flat and like I was painting by numbers. Not good.

Needless to say I was not happy. Momentum killed. Deadlines to be missed. And worse, that anxiety when there is not a story to be worked on.

Writing Advice: Picking Up the Pieces

I gave myself one day off. No writing. No worrying about it. Do the other things that make life wonderful.

Then I jumped back in.

First I processed what happened. I wrote several pages ripping into the work in progress, turning the vague thoughts into specific critiques around character motivation, plot, pacing, protagonists and more. Often times, I had more questions than answers.

This processing confirmed for me that this draft was not working.

Next, I laid out my options:

1) Return to the story as is, finish the draft and edit heavily later on.

2) Go back to square one. Re-examine the concept, improve, salvage what I can and start a new draft.

3) Abandon the piece entirely and work on something new. I have a long list of other projects that I am wanting to work on over the next several years:

In the end I decided on number two with a short concurrent foray into a modified number three.

Part of my reasoning for this is that I am not willing or ready to give up on the Hounds of the North series. I enjoy the world. I want to further explore the characters of Shield and Spear. I also want to test the idea that a series leads to greater sales over time. Two books a series does not make.

So my plan is this:

-Rework my short story The King Beneath the Waves with a goal of tightening up the prose and the plot and submitting to magazines.

-Concurrently, go back to square one on the work in progress. I have decided to better plan the novel so I do not hit this roadblock on the next draft. So this week I am deep into studying beats and theories of story structure. I want to be able to start this next iteration of this project in a stronger position.

For me this position means a really clear simple idea of the story, one main character, very well-defined weaknesses and desires, and the end change that the character goes through. Once these are in place, I want to develop the beats for the novel and develop an outline that describes each scene (setting, character, action, and the movement in the story).

I want a super solid outline in place, one that I can mull over and adjust, and then when it is ready provides me a solid road map to complete the novel.

I’ll let you know how it works. Wish me luck.

Peter Fugazzotto is a fantasy and science fiction author who fights to protect the earth by day and battles his ego with armbars and slashing sticks by night. He lives in Northern California with his wife, daughter, bird and dog. His short stories have been published in Heroic Fantasy Quarterly, Grimdark … END_OF_DOCUMENT_TOKEN_TO_BE_REPLACED